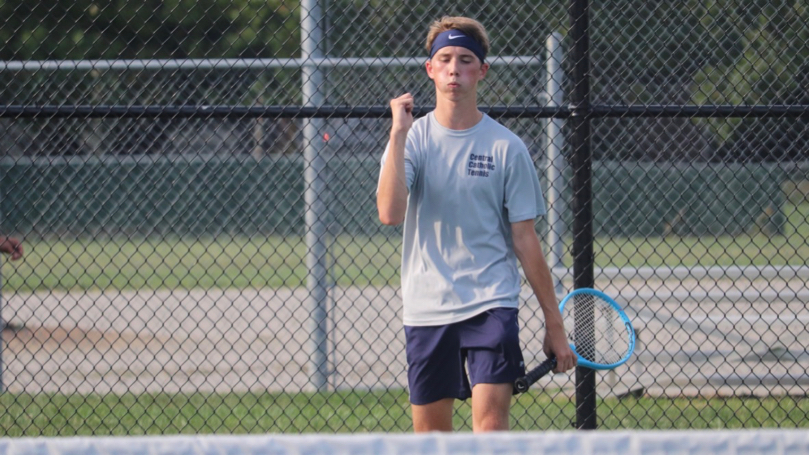 The Knights boys tennis team won their second home match in as many days by beating the Benton Central Bison at Rohrman Courts on Tuesday evening. The Knights No. 1 doubles team of Griffin Chyall and Nolan Pickerill (LCC) sealed the team victory by taking the third point of the evening with their 6-3, 6-4 win. Earlier in the match the Knights no. 2 doubles team of Michael Fusiek and Sam Siemers (LCC) won in straight sets 6-1, 6-3. Dylan Riley (LCC) was first off the courts with a 6-2, 6-1 victory at No. 3 singles. After dropping their first sets, the Bison won the second sets and forced tie-breaker sets at No 1 and No 2 singles against seniors Patrick Gothard (LCC) and Sebastian Lux (LCC), Lux held off Cael Williams (BC) to win the tie breaker 10-4 at No. 2 singles, while Gothard fell to Alex Thurston (BC) 10-7 at No. 1 singles in an exciting and well-played match by both competitors.

The Knights JV team continues their winning streak with wins at all of the JV matches against the Bison.

Girls 7th Grade Basketball at East Tipp - A Only

Girls 7th Grade Basketball at Delphi - A Only