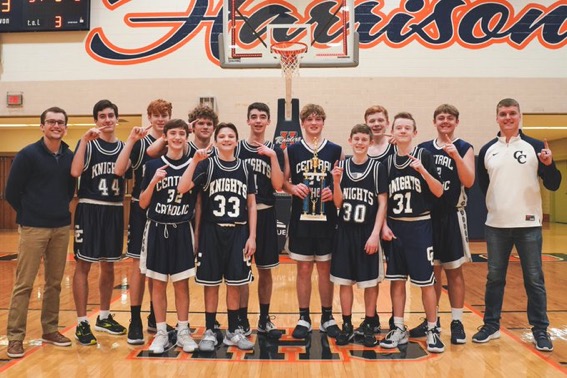 The Freshman Boys Basketball team beat Harrison 51-45 to win the Greater Lafayette Area Tournament Championship. In the first meeting between the two teams earlier in the season, the Knights narrowly escaped with a victory, winning 40-39 in overtime. However, with two starters from that game now playing up with the JV squad for the Knights, the boys knew they were in for a challenge against a talented and well coached Harrison team; but, it was a challenge the Knights wanted and were ready for.
The championship game was a battle with both teams trading runs throughout. The Raiders struck first and led 15-12 after the first quarter. The Knights were then able to grab a hold of the momentum in the second quarter to take a 30-25 lead into halftime and then carry that momentum into the 3rd quarter, scoring the first 6 points to take a commanding 36-25 lead midway through the period. From there, the Raiders would respond by scoring 10 unanswered points to finish the quarter and cut the lead to 36-35. The two teams went back and fourth to start the 4th quarter, but it was the Knights who were able to get more defensive stops to gain the advantage and then secure the win at the free throw line.
Defensively, it was team effort for the Knights as they were able to consistently be in position to avoid giving away easy buckets for the Raiders who, to their credit, were still able to knock down some tougher looks that the Knights’ defense allowed. The Knights were balanced offensively with Nick Page (10 pts), Keaton Brooks (7 pts), Brinn Robbins (7 pts), and Gavin Boutelle (6 pts) all contributing, but Bryce McCammon (21 pts) carried the load for extended periods of time, especially in the first quarter where he scored 10 of the 12 points for the Knights to keep them in the game. The championship win was a fitting and well deserved end to the season for Knights, who worked hard with great attitudes all season long and finish the season with a 15-2 record.