Wednesday night the Varsity Wrestling team traveled to Carroll to take on the Cougars.  The Knights had to give up forfeits at 113, 132, 185, and 195 giving Carroll the edge and the win.

The Knights next travel to North Putnam on Saturday for the Kenny Kerns Invitational.

Former Spanish teacher Ken Steeb, who now works at Carroll, stopped in to watch the action.  After each wrestler’s match they visited him and shook his hand, and he even joined us for a team photo. 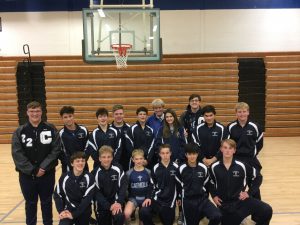 Girls 7th Grade Basketball at Southwestern M.s. - A Only

Girls 8th Grade Basketball at Southwestern M.s. - A Only