The varsity wrestling team traveled to Sheridan to take on the Blackhawks.

To start the night 160 Felipe Viera won by forfeit, 170 Peter Brown won a tight match 5-4, 182 Alex Denney and 106 Calvin Pickerill both won by forfeit, 113 Dominic Skees won by pin fall, 126 Andrew Kline lost by pin fall, 132 Isaac Switzer won by forfeit, and 138 Christopher Antonio lost in sudden victory 10-8. With the score tied at 33-33, the night came down to the last match, 145 Dakota Skees controlled his opponent scoring a major decision 12-0 to boost the Knights to a 37-33 victory.

The team next wrestles at the Hoosier Conference Tourney, at Western HS, on Saturday. Then they travel to Seeger on Tuesday, January 15th to end the regular season and begin to prepare for the Jeff Sectionals. 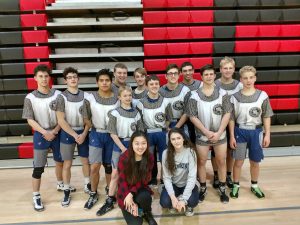