The Lady Knights Volleyball program picked up two very significant team academic awards today.  The Knights received word from both the AVCA(American Volleyball Coaches Association) and the IHSVCA(Indiana High School Coaches Association) that they had been selected to each organizations Team Academic Lists.  The teams had to sustain a minimum of a 3.30 grade point average out of a 4.0 scale to be considered.  We are extremely proud of our kids as they are true student athletes both in the classroom, on the court and in our community.  As part of earning a spot in the AVCA Team List, the Knights were among a record breaking 973 volleyball teams across the United States from Division 1 all the way to the High School Varsity level for the 2017-18 school year and only 358 High Schools were named to this list quite an accomplishment for our student athletes. Lafayette Central Catholic was one of only 13 female volleyball programs in Indiana to be to the IHSVCA list as well for this past school season. 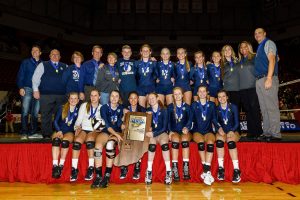 Broncho Duals
9:00 am
View All Events