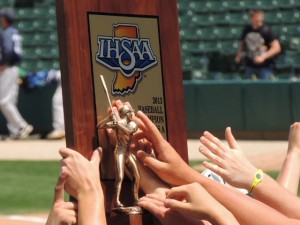 Lafayette Central Catholic opened up the 2015 campaign with a 7-3 victory over North Montgomery on the road Monday evening.

Jackson Anthrop led the Knight offense with a 3-3 effort that included a double in the first inning and singles in the third and seventh innings. Coy Cronk also had a 3-3 night at the plate.
Sophomore Noah Richardson held North Montgomery scoreless for 5 1/3 innings for the win. Richardson allowed two hits, two walks and struck out seven.

LCC scored in all but two innings including two-run rallies in the fourth and seventh innings. In the fourth, LCC scored on back to back RBI doubles from Richardson and Luke Schrader.

After North Montgomery pushed across three unearned runs in the bottom of the seventh, Ben Tharp came in from the bullpen and retired the final two batters to earn the save.

The Knights travel to Western High School for a 5:00pm contest on Tuesday against the Panthers.

Girls 7th Grade Basketball at East Tipp - A Only

Girls 7th Grade Basketball at Delphi - A Only